Homage to the Men of the Sea 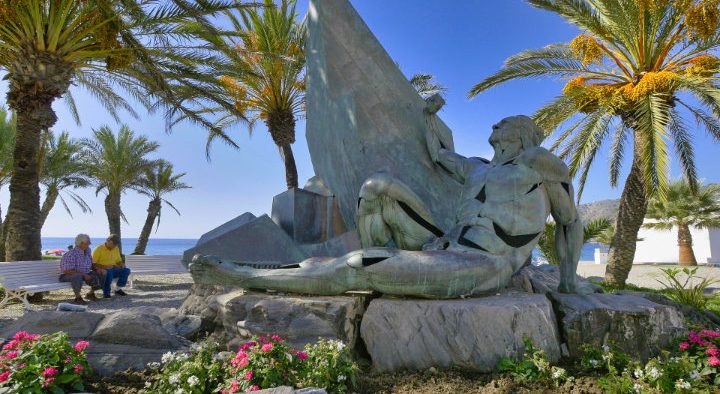 Just as we arrive at La Herradura by the entrance that gives access to the National Road 340, which was the longest road in Spain, which follows the route of the ancient Via Augusta built by the Romans, we are warmly welcomed by a spectacular sculpture that is located on the Paseo Andrés Segovia in the village of La Herradura.

It is very easy to find this monument since, as we have already mentioned, it is right at the main entrance to the village.

It is a bronze monument from 1990, the work of the Granada sculptor Miguel Moreno, which represents the maritime tradition and is a tribute to the dreadful shipwreck of the Armada of Philip II in the 16th century.

The sculpture depicts a man sitting on the ground, with one leg extended and the other bent, next to the upright bow of a boat sinking into the sea, looking up to the sky in anguish at the imminent sinking of the vessel under the relentless waters of the bay.

It reflects the rage and helplessness of being unable to do anything while the shipwreck is inevitable.

The aforementioned shipwreck is a very important historical event because it was a very hard blow for the Spanish Navy at the time, as in addition to the death of almost 5. 5,000 people died (more than three times as many victims as on the famous Titanic), among them important and prominent sailors, women and children, 25 galleys of the 28 that made up the squadron captained by Juan de Mendoza were also lost, but nevertheless this fact has faded away over the years, But thanks to the work of the historian María del Carmen Calero Palacios, in her thesis, this fact was recovered for the historical memory because with her work it was possible to publish a highly documented book in 1974 and, later, republished in 1990, coinciding with the inauguration of this monument.

Thanks to this important research work, local residents and historians learned about the events that took place in the waters of the bay of La Herradura and their terrible consequences.

It was a horrifying tragedy, because those 25 ships that sank were carrying the families of many soldiers who were in Oran, and had travelled to Malaga to get supplies before going to the African continent.

However, due to the bad weather, Don Juan de Mendoza y Carrillo, captain general of the fleet, ordered the ships to take shelter in the bay of La Herradura in order to take refuge from the bad weather. However, the strong waves and the wind first pushed the ships against each other and then they ended up crashing against the cliffs.

The statue is surrounded by a group of palm trees, rocks and park benches and has become a popular meeting place for the inhabitants and visitors of La Herradura.

Likewise, every 19 October, the day of the fatal shipwreck that occurred in 1562, this event is remembered in La Herradura with the celebration of different cultural events.

In which, although there is no official protocol established, different acts are usually carried out such as the inauguration of an artistic paving; demonstrations on navigation and orientation aimed at schoolchildren; floral offerings, not only in memory of the victims of the historic shipwreck but also remembering all those who died at sea; and it should also be noted that in all these events there is a great participation of both citizens and public institutions and private companies, from the Guardia Civil to schools and diving clubs in La Herradura.

¿Cómo llegar a Homage to the Men of the Sea?

Discover Almuñécar 2021 ©All rights reservd.
This site is registered on wpml.org as a development site.