All along the beach of Almuñécar and La Herradura you will find many of the famous chiringuitos. Chiringuitos are those beach bars, so typical and deeply rooted all along the Costa del Sol Tropical, whose origins are equally diffuse. Although many have modernised into beach clubs and have come to call the old-fashioned sun loungers “Balinese beds”.

Although all the chiringuitos along the Sexitano coastline are very similar, both in their offer and their style, we can find among them different atmospheres, as we have already pointed out, some continue to have that classic atmosphere of a bar made with beers by the sea, to the most modern “beach clubs”, but what they all have in common is their summer charm that always remains.

There are also some differences in quality and services between the different beach bars, although with very little margin.

The definition of the classic chiringuito on the Spanish coast and therefore on the coast of Sexitano, is a food, drink and tapas establishment located on the beach, next to the promenade, but there are also non-urban beaches where we find a chiringuito, such as on the beach of El Muerto where we can discover the chiringuito run by Justo Bagúeste or La Barraca on the beach of Cantarriján.

Among the most outstanding characteristics of the chiringuitos, apart from having a terrace on the sand of the beach with its umbrellas, is that they prepare many of their dishes (such as the sardine skewers) with firewood in a fire that burns inside a boat stranded on the beach full of sand.

The flavour that this fire gives to both the sardines and the octopus is exquisite and characteristic.

The most widespread origin of the word “chiringuito” begins its history at the end of the 19th century, when the workers on the sugar cane plantations in Cuba took their breaks to drink coffee, which they strained through a fine cloth through which a small stream came out, which the labourers called “chiringo”, which ended up becoming “chiringuito”, which is why the kiosks improvised with reeds where they drank coffee ended up being baptised as “chiringuitos” (little beach bars).

Later, in 1913, in Sitges (Barcelona), a bar opened on the beach which the writer César González Ruano, who visited it every day, named “El Chiringuito” as a tribute to the workers on his longed-for Caribbean island.

But there are more stories, theories and hypotheses about the origin of why these establishments are called “chiringuitos”.

But the most important thing is that whatever their origin, what is undoubtedly important to us is that these initially precarious establishments, which with successive coastal and health laws have been forced to be built or remodelled into constructions, are places where time stands still and our body feels a sense of wellbeing that is difficult to find anywhere else in the world.

We are talking about that special charm that is felt in those moments of the aperitif or the meal after a morning of holidays on the beach, for all this we invite you to enjoy any of the many beach bars that you can find along the coast of Sexitano. 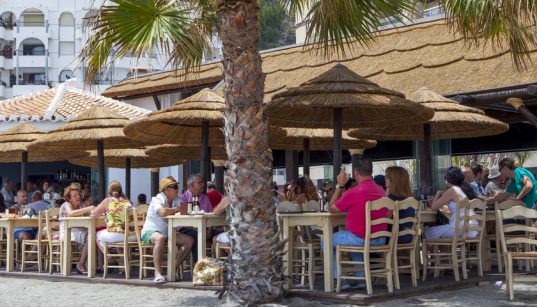