Eating tapas in Almuñécar, best bars to visit in town

If there is something characteristic of the whole province of Granada it is tapas, and Almuñécar and La Herradura on the Costa del Sol Tropical, are one of the best places for tapas at any time of the year thanks to its privileged climate, as well as the generosity of its tapas, and which does not suffer the massive crowds of tourists as in other more western coastal towns of Andalusia.

Tapas, or going for tapas, is an experience not to be missed.
A tapa is a small snack served free of charge with any drink.

Depending on the policy of each establishment you can choose up to two varieties of tapa in each round per group of customers, or they will have an established order for the first, second… which usually increase in terms of portions as the rounds increase.

Almuñécar and La Herradura are known for their enormous tapas at very good prices, so eating tapas is always a very economical and varied option. A beer or a soft drink costs around 2 euros in all the bars in the area.

A couple of drinks with their respective tapas, or three for the more gluttonous, would be the equivalent of a dish of the day in any other bar or restaurant in the rest of Spain.

So, if you visit Almuñécar or La Herradura, don’t hesitate to have a couple or three beers for lunch or dinner, it will be very economical and you will enjoy the local gastronomy. Also, if you get tired of drinking or are not very thirsty, you can always order some raciones or an extra tapa in any bar.

Some, but not all because the offer is almost unlimited, of the most emblematic bars in Almuñécar and La Herradura are:
Bar los Pajaritos, although it is a traditional bar, it is also very glamorous as it is frequented by some celebrities, such as Eva Hache or the Loco de la Colina, Jesús Quintero.

It is in a very central location, and on key days it is always packed to the rafters. And their tapas are always fish and seafood.

La Bodeguita, is another classic that cannot be missing in any self-respecting list, also most of its tapas are “pescaíto frito” (fried fish), so characteristic of the area.

Bar Higuitos, which has a large terrace and is great for a tapas paella.
Restaurante Andalusí, which despite being a restaurant also has a tapas area in its bar, very close to the beach.

The origin of this custom is unclear and is lost in history, but there are several hypotheses, from the one that tells that it was King Alfonso X the Wise who was prescribed by his doctor to take sips of wine due to an illness, and to avoid the effects of alcohol he would eat a small portion of cheese or ham between sips.

When he recovered, he ordered that wine should not be served in the inns of his kingdom without being accompanied by a portion of food, so that the diners would not be so affected by the alcohol in the wine, thereby masking its effects.

There is also the idea that during the Middle Ages, to prevent flies from getting into the drink, the glass was covered with a piece of bread or ham; and another version of the history of the tapa is to prevent brawls and fights in taverns because of alcohol, so the Catholic Monarchs ordered that a portion of food be served with the drinks to alleviate drunkenness. 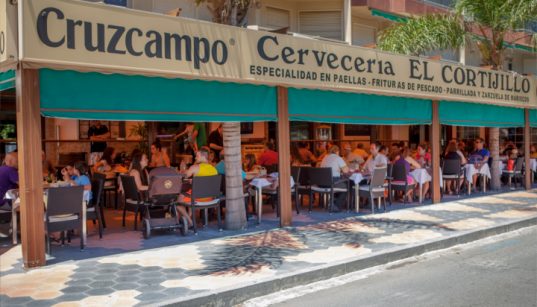