How to get to Almuñécar from Malaga airport 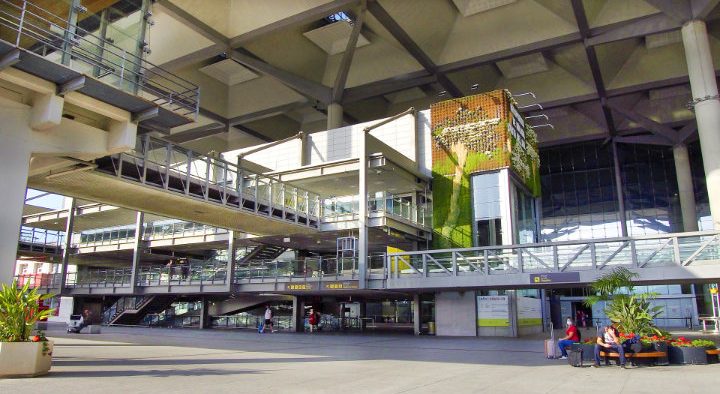 When we start a vacation, the first moments are always disturbing and among those sensations, the concern of reaching your destination, Almuñécar, can be one of them.

Therefore we wanted to help you to move with whatever transport, always have a route map and you can travel through Spain with peace of mind.

How to get to Almuñécar? Traveling along the Costa del Sol

Of course there are many ways to get to Almuñécar depending on where you come from, so in case you arrive from Malaga airport we are going to explain below the most feasible options you have.

1. Bus from Malaga airport to Almuñécar

Taking a bus although it is one of the cheapest options, the number of services between the Malaga airport and Almuñécar is really scarce. Sometimes getting to just two trips a day.

The duration is approximately 1 hour and 45 minutes. The journey is usually direct.

In case of carrying delicate or high-value luggage, we do not recommend this option since the trunk of the buses is not provided for such care.

2. Rent a car at Malaga airport or travel in your private car

Another option is that you have your own private car, either your own or for rent. In that case we recommend the following route:

It is comfortable if you bring your own car to transport the luggage and most importantly, to be able to enjoy the mobility that you please at all times.

If you need to rent a vehicle, both at the airport and in Almuñécar, you will find this service at the local Almuñécar company that also offers service at Malaga Airport. Browse through their website to find all kinds of prices and opportunities.

There are also other services in the city such as Rent a Car Joya.

Another possibility, although perhaps the most expensive, to get to Almuñécar is by taxi. There are several options if you want to use this option.

You can go to the airport gate where you will find the taxi station but you may encounter long queues, as well as unaffordable prices as they add extra charges for luggage, passengers, mileage and different needs you may have.

There is also the possibility of pre-booking a taxi from Almuñécar with a closed price and without supplements, which means that you will know from the beginning the total price of your transfer from Malaga airport to Almuñecar.

But if you want to not worry about driving and experience a relaxing vacation at the hands of expert drivers, you can consider the option of traveling by private transport obtaining the car you need for your luggage and companions.

Although within the options already explained this is the most expensive, it is undoubtedly the most comfortable as well as it will suit all your needs and you will not have to worry about anything other than looking out the window at the beautiful landscape you find to get to Almuñécar.

We present some of the options you have to choose your private transfer from Malaga airport.

Companies like Suntransfers that offer luxury routes at a high price, a quality service but not affordable for all budgets.

Or also HolidayTaxis a private transfer services broker, something similar to the previous company happening.

That is why we want to tell you about the private taxi company that we offer in Almuñécar, a way to help the local company and to enjoy your transfer at an appropriate and feasible price for all types of vacations.

Autosexi, the Almuñécar transfer company that will complete your vacation

In Autosexi, the company of transfers and taxis hired in advance, originally from Almuñécar, with delegation at Malaga airport and throughout the Costa del Sol and Costa Tropical.

You will find drivers with long experience, the possibility of finding low cost rates with high-end cars such as Mercedes, Audi and other premium and Top Class options. Complying with the prevention measures established by the government, with prices within your reach and with availability to a team of professionals who will answer any questions you have.

What will you find when you arrive in Almuñécar?

Not only good weather awaits you in the city, but also many leisure activities to explore. But if you want to know the city like a local, do not hesitate to check our section on local festivals, as well as where to eat in Almuñécar and also how fun it is to go to places like Loro Sexi Park.

Want to learn a bit more about the taxis from Almuñecar?

Let us tell you the history of a family saga dedicated to the Taxi in Almuñecar since its first runs.

Descubre Almuñecar is pleased to present The History of a family saga dedicated to this unique means of public transport for more than 70 years in the oldest town in the Spanish Mediterranean to all its followers, visitors, and inhabitants.

The history of the taxi in Almuñécar and La Herradura goes back to the end of the Spanish Civil War (1936-1939), when there were only 2 taxis in Almuñécar and La Herradura for the whole municipality. However, this singular and modern means of public transport had a great development from the already distant year 1948, thanks above all to Don José López Castillo and the López Rodríguez family with a car acquired from the then Archbishop of Granada, Don Balbino Santos Olivera, since then the first large taxi services began to be provided, linking the coast with the rest of the province and mainly with the capital, Granada. The López Rodríguez saga was a taxi reference in Almuñécar.

With the aforementioned vehicle, many journeys were made connecting Almuñécar and La Herradura with the rest of the province of Granada, and Malaga International Airport, which two years earlier had already had civilian operators after the Spanish Civil War.

And although it was a taxi service, it is also remembered for being an improvised ambulance as there were not many vehicles available at that time. It was even an improvised delivery room on more than a few occasions, as on the way to the hospital in Granada some women in labour could not hold on and gave birth to their babies in the Almuñécar taxi, on the old road that linked the coast with the capital, known as the “Carretera de la Cabra”, today a classic cycling route which, except for the bus that links the different villages it passes through, is no longer used by the vast majority of car drivers. Also in the early years of the taxi in Almuñécar, it was used to bring families to see their sons swear the flag, while they were doing their military service in some barracks in the province of Granada or the rest of Spain.

The usual arrival point in the centre of the capital was the famous Plaza de la Trinidad, next to the Posada la Espada, very close to where, in 1936, the famous international poet from Granada, Federico García Lorca, was arrested before his assassination.

Don José López Castillo was married to Francisca Rodríguez Jerónimo, and her brothers soon entered the world of passenger transport, driving new vehicles that were acquired, specifically three SEAT 1.500 of the time. However, first Antonio at the end of the 50’s of the 20th century, and shortly after his brother Miguel in 1963, continued the family tradition with the taxi business, but each of them in their own way.

From the 60’s onwards, with the boom in tourism along the Costa del Sol, which at that time stretched from the border of the province of Almeria with the Region of Murcia to the Gibraltar countryside, and the growing film industry, especially in Almeria, it was not unusual to find in the Rodriguez brothers’ taxis, as well as tourists from all over Europe, great film stars such as Ava Gardner, a young Clint Eastwood, Yul Brynner, Charles Bronson, Henry Fonda and many more. The relationship between the film industry and the taxi was so important that in the 1970 film “Los Hombres las prefieren rubias”, Antonio Rodríguez Jerónimo appears playing himself as a taxi driver.

As early as 1972, Don José López Castillo owned up to three taxis, which represented a high percentage of taxis in the town of Almuñécar.

During the eighties of the 20th century, the next generation of these families gave a new and modernised impulse to the business, with the arrival of Manuel Rodríguez Guerrero in 1984, who joined the taxi business on his return from military service, which was compulsory for all men at that time.

And to finish the decade, and to give a small change towards real equality between men and women, in 1989 Teresa López Rodríguez, daughter of the pioneer José López Castillo, also ventured into the world of taxis.

This last generation continues today, day after day, twenty-four hours a day, three hundred and sixty-five days a year, at the controls of their taxis. Although the third generation of this family saga, represented by the grandson of José López Castillo and son of Rafael López Velez, Rafael López Naranjo, is already making his way firmly into the world of taxis in Almuñécar.

Previous Article
Andalusian Flamenco Ballet
Next Article
How to get to Almuñécar from Maria-Zambrano Malaga station?

Discover Almuñécar 2021 ©All rights reservd.
This site is registered on wpml.org as a development site.