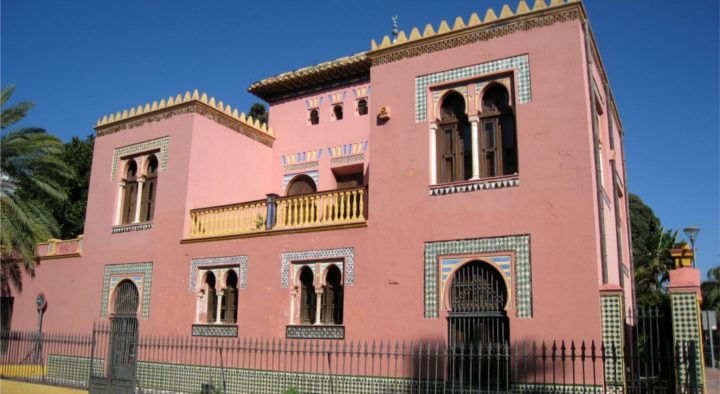 Building built in the 19th century, within the style called “neo-Alhambrismo”, it is one of the architectural references of the municipality. It was originally a private home that was located next to a sugar factory, but since the 1980s it has housed the offices of the Almuñécar Tourist Board as well as the town’s main tourist office.

Surrounding the building is a beautiful garden, a miniature house and a collection of fossils.

The Palacete de la Najarra is a place not to be missed when visiting Almuñécar.

It is a building in the neo-Arabic historicist style, which was built in the 19th century on the site of a Moorish house. It was commissioned by the owner of the land, Doña Encarnación Márquez y González de Mendoza Merchante, to Don José Rubio Osorio, who hired Moroccan masons and craftsmen for the work, who came from the city of Tetuan itself.

It is currently the Tourist Information Centre, and is also the venue for public institutional events. In addition, exhibitions, concerts and a large number of cultural activities are held in its gardens.

At first it may go unnoticed because the wall that surrounds it does not foretell the majesty that can be found inside.

But it is a majestic palace that was once located on the outskirts of the city, next to a sugar factory, a few metres from the San Cristóbal beach, and next to the Majuelo park, it was built on an old Arab house.

Originally, therefore, the building had a suburban character, nestled among orchards. Today, however, with urban growth, it is right in the centre of the city.

The entrance to the complex is on one side, enclosed by a fence, as a result of the opening of the Avenida de Europa, and once you enter the complex, the first thing that strikes you is a beautiful garden in the Andalusian style, with a fountain in the Arabic style right in the centre.

In addition, in this garden there is a wide variety of different plants such as: medlars, aphids, sapote, palms, ficus, angel trumpets, and a long etc….

In the garden there are also a series of tables and different sculptural elements made with fossils and a small Andalusian house with two floors, very curious, as it is made to scale, in fact, the house was built in 1939 so that children could play, everything is reduced in size. You can even visit it by asking for a key. It is like a hobbit’s house.

And then we come to the main building, the palace itself, whose main façade is oriented towards the garden, which is a rectangular construction with two floors.

Here, we find a large central entrance opening with a horseshoe arch, above which there is a belvedere. In all its interior and finishes there is a certain air reminiscent of the Alhambra and the Generalife in Granada, the most visited monument in Spain, which is why it is also said that the Palacete de la Najarra is in the “Neo-Alhambrismo” style.

The main building is flanked by two higher bodies, with a hipped roof, which simulate towers. Also, the whole complex has a large number of twin windows, decorated with alfices, and skirting boards with different coloured tiles. The interior walls are decorated with frescoes, muqarnas and Nasrid tiling.

All these elements create a feeling of a terrace-like space at the back, set back between the two side volumes, which also have a certain tower-like appearance, albeit lower.

For all these reasons, we invite all visitors to Almuñécar to discover the Palacete de la Najarra, the little house for the little ones and the garden where you can stroll among an infinity of tropical plants, because it is one of the best experiences you will have as soon as you arrive at the Almuñécar Tourist Information Office.