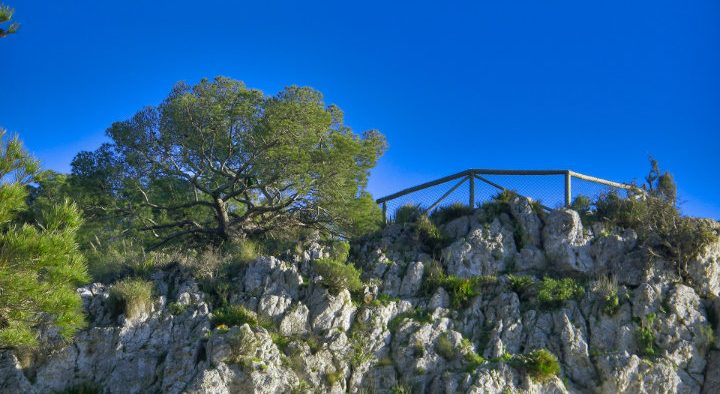 The cliffs of Maro-Cerro Gordo are a natural site, at the western end of the coast of the province of Granada, which follow a narrow strip of about twelve kilometres parallel to the coastline from Almuñécar to Nerja, passing through La Herradura, which also penetrates a mile inland from the sea.

It is made up of a series of cliffs and coves, up to a height of 325 metres and a drop of 250 metres, formed by the foothills of the Sierras de Tejada, Almijara and Alhama, eroded by the effects of the waves of the Mediterranean Sea.

There are also different hiking routes, and from the beach you can see mountain goats.

The beaches of Cantarriján and El Cañuelo are separated by the escarpments of Torre del Pino, Peñón del Fraile, Cerro de la Caleta and Cerro Gordo. Although there are paths between the hills that link the two beaches.

The cliffs of Maro-Cerro Gordo were declared a natural area in 1989 and, due to their importance, they are also considered by the United Nations as a ZEPIM (Zone of Special Importance for the Mediterranean), which is why the Plan for the Management of Natural Resources of the Natural Area establishes special regulations regarding navigation and the prohibition of fishing in the area.

The vegetation is typical of the Mediterranean, with many stone pines, myrtles, maritime rosemary, thyme, lavender, lavender, albaidas, palmettos and mastic trees, among others.

On the aforementioned Alberquilla beach there is a curious psammophilous vegetation, of which we can highlight the prickly pear and the sea caterpillar.

Also under the waters of the Cañuelo beach there is orange coral or star coral, which inhabits rocky areas where there is hardly any sunlight.

On the other hand, on the escarpments near the Torre del Pino, we find an abundance of some typical coastal species such as the yellow asterisk, maritime fennel, sea lavender and lavender.

Under the sea water we can observe three of the four species of marine phanerogams present on the Andalusian coast: Cymodocea nodosa, Posidonia oceanica and Zoostera marina.

In terms of fauna, the two-tailed bajá butterfly stands out among the insects. Among the reptiles, the “Andalusian dragon” chameleon, which is in danger of extinction. Of the mammals that live in the area, we must highlight the hedgehog, the genet and the aforementioned mountain goats.

And in the sea water we find crabs, sea tomatoes and mussels.

And finally, flying between the cliffs and the sea there is a great variety of birds such as yellow-legged gulls, kestrels and peregrine falcons, but also terns, robins, chaffinches…

We invite all visitors to Almuñécar and La Herradura to enjoy ecological tourism, always respecting nature, from the sea or on land.

We can access the cliffs by kayak from the beach of La Herradura, and there are several companies that organise kayak excursions from there to visit the sea caves and divers come from all over Europe to contemplate the spectacular seabed; or by land along the marked trails or simply enjoy the unspoilt beaches which in summer can be reached by shuttle bus.

But that’s not all, there’s more, because in the protected area we find several watchtowers from the 16th century, which served to protect the coast from attacks by Barbary pirates.

And the beach of Cantarriján is a spectacular place to enjoy the rain of the Perseids or tears of San Lorenzo on summer nights.

How to get to the Maro-Cerro Gordo Cliffs?