Parks and nature from Almuñecar 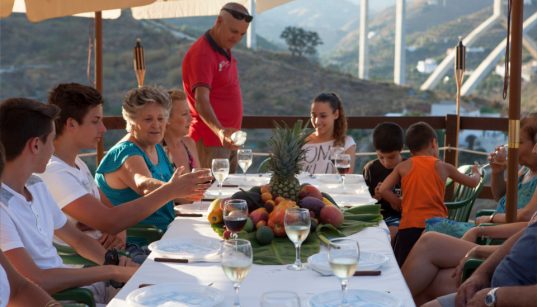 Subtropical fruit tastings from the tree

Just escaped from adolescence, but of those who have already taken possession of their future. My shows are about the ...

El Majuelo Park is located in the historic centre of Almuñécar, at the foot of the Castle of San Miguel.

Thanks to the privileged climate of Almuñécar, this park is also an important botanical reserve, where we can enjoy more than 180 species of tropical and subtropical plants from different parts of the world.

However, bearing in mind that Almuñécar is the oldest city in the Spanish Mediterranean, and that all the cultures of antiquity have passed through it, we can also contemplate the old fish salting factory, where the famous garum was made.

This factory was originally the work of the Phoenicians, but during the Roman Empire, it grew and became a very important production centre for the city of Almuñécar at that time.

In addition, inside the park there is an auditorium designed by the master Timoteo Urrengoechea Gomeza.
And as Almuñécar is also a centre of art, throughout the park you can discover sculptures by Syrian artists, thanks to the collaboration of the city of Almuñécar with this country.

This is a special park, as it is located on the seashore surrounded by a leafy grove of pine trees and other classic species of the Mediterranean climate, along the seashore, making it an exceptional place to stroll and contemplate nature while feeling the gentle sea breeze.

In addition, its location affords its visitors unbeatable views, and it is an excellent place to take spectacular photographs, which is why many couples choose this spot for their wedding photos and other celebrations.
Along its route there are a number of points that are true panoramic viewpoints.

This is a museum with a surface area of approximately 2,000 square metres, dedicated to the study, dissemination and enjoyment of these small trees.

This Bonsai Garden-Museum is the most important in Andalusia and is among the best in Spain and Europe.

Here we can see a large number of species from different parts of the world, brought from Asia and other parts of Europe, and of course also native to the province and the Mediterranean coast.

Also this museum shows a part of the Japanese culture, old and beautiful garden lanterns, and besides bonsais in the Garden-Museum we can enjoy the pond of the sacred carp, the dry Zen garden and the floral wet garden, Buddhist fountains, some trees more than a hundred years old and the beautiful bull gates.

A few minutes drive from the historic centre of Almuñécar is the Peña Escrita Nature Park. It is a tourist complex for nature lovers, but also for the bravest and lovers of the so-called “active tourism”.

Because it is a place where you can find several different geographical reliefs such as: the foothills of the high mountains of the Sierra Nevada, which contrasts with the tropical valley and the intermediate landscape of the Alpujarra.

Therefore, visitors can enjoy encountering animals in the wild such as mountain goats and deer, the fresh smell of rosemary and thyme, and spectacular views surrounded by typical Mediterranean vegetation.

Furthermore, for lovers of hiking, on the old paths that connected the capital of the province with the coastal area, there are now many trails for walking, cycling or horse riding, and there are also companies that organise paragliding flights in the area.

Very close to the Peñones del Santo, just under 100 metres from the Mediterranean Sea, is the Loro Sexi bird park, next to the Parque del Majuelo.

This park houses a very important collection of more than 100 types of bird species, as well as other animals such as turtles, lemurs… and a beautiful cactus garden.

Here we can find from the common pigeon, to peacocks, parrots, toucans, swans, ducks and a very long etc…

If you are spending a few days in Almuñécar or La Herradura, don’t forget to visit one or some of these parks, it is a recommendation of Descubre Almuñécar.