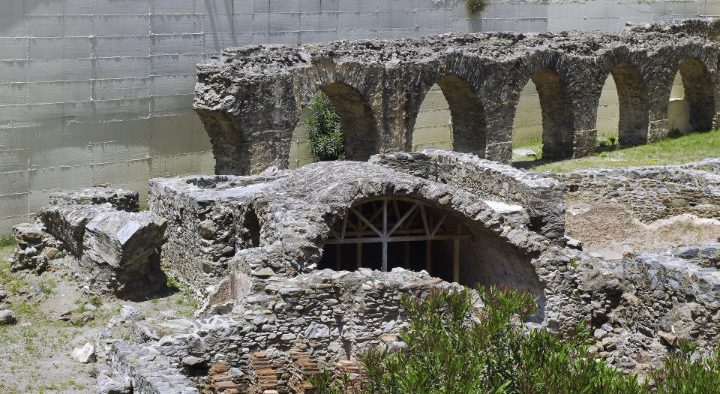 Almuñécar, the oldest city in the Spanish Mediterranean on the Costa del Sol Tropical, is also the city with the most archaeological remains from the Roman Empire in the province of Granada.

Sexi, as the city was called by the Phoenicians, passed into the hands of the Romans after the Second Punic War, after the battle of Munda, when it was renamed Firmum Iulium Sexi, in gratitude for the support shown to Julius Caesar. From then on, this locality became an important city with numerous buildings. Many vestiges of all the historical journeys in which it played a leading role have survived to the present day.

Among the very important remains found during the various excavations carried out by archaeologists are the Roman Baths of La Carrera, which are located near the administrative centre of the city, next to the Roman aqueduct and in front of the monument in homage to the men of the countryside, sculpted by the Granada artist Miguel Moreno Romera.

The archaeological remains of the Carrera baths were found in 1996 by Molina Fajardo, and the excavations were completed five years later, in 2001, by the team of the prestigious archaeologist Antonio Burgos.

These remains are made up of four rooms interpreted by experts as a dwelling or outbuildings, and also fifteen structures that corresponded to the hot and cold water circuits of the baths, among which it has been possible to identify a cistern and probably six pools.

The floor of the latter was finished with a material made of a waterproof mixture of lime, sand and ceramic pieces, called opus signinum. Furthermore, according to the studies, the water supply would have come from the same aqueduct in the area.

The remains of the hypocaust or oven can also be found at this site. The hypocaust was the system based on the distribution of hot water and steam for the pools through tunnels and pipes. It extended under the floors of the rooms and pools, fed by the furnaces in the basement.

As is widely known, the public baths or thermal baths in Rome and the rest of its empire were a social meeting place, especially for the upper classes of society.

The entire complex is dated to the 1st century AD, and was probably in use for at least three more centuries, until the 4th century AD, at which point most of the baths were abandoned.

Also close to the area of the aqueduct and the baths were found remains of both medieval Muslim graves, belonging to the cemetery (Maqbara) of the Muslim city of al-Munakkab (Almuñécar); and a monumental turriform tomb also from the Roman period.

But there are still more baths throughout the city, because the Roman baths of La Carrera are not the only ones preserved in Almuñécar.

There are others that are currently integrated into a hotel complex near Cotobro beach.

Among the archaeological remains found are a well and buildings that could correspond to part of a villa. These baths, like those at La Carrera, are also dated to the first or second century AD.

If you visit Almuñécar and La Herradura or you are on the Costa del Sol Tropical for tourism, do not forget to enjoy its history, visit its archaeological sites and museums, because Almuñécar is much more than just sun and beach, discover all its culture and ancient history in any season, thanks to its privileged climate that is pleasant during the twelve months of the year.

How to get to the Roman Baths of Almuñécar?

Previous Article
Hiking, the old fishermen’s trail in Almuñécar
Next Article
The Roman Bridge of Almuñécar