The Roman Bridge of Almuñécar

The Roman Bridge of Almuñécar 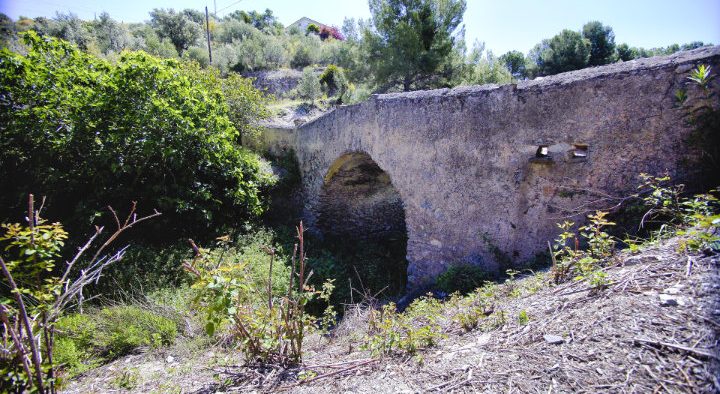 This bridge, about 18 metres long with a height of 6 metres, also called Puente Viejo de Almuñécar, which spans the Cotobro ravine, can be easily found very close to the beach of the same name.

Although it is well known that throughout history it has undergone many alterations, its first construction dates from between the first and third century AD, so it has a Roman origin, although there are not many remains of the original Roman structure due to the changes experienced throughout its twenty centuries of history.

It is another clear example of the extensive history of the city of Almuñécar, the oldest city in the Spanish Mediterranean.

It is a single-span bridge, made of hydraulic masonry built with irregular stones from the area, and is founded on the banks of the ravine.

We can also see that the thread is supported by abutments whose construction is made up of horizontal slabs almost half a metre thick. Furthermore, it has a somewhat zigzagging shape.

It is also called the “Alcantarilla de Cotobro”, because the term “alcantarilla” refers to the small bridges with a single eye.

According to a widespread legend, Hercules himself (Heracles), symbol of Andalusia, crossed this bridge, as the coast of Almuñécar and La Herradura were part of the famous Heracleian or Herculean Way, along which the classical hero drove the oxen stolen from Geryon, in one of the famous 12 labours Hercules carried out to prove he was a demigod.

The Via Herculea, which started in Cadiz, ran along the entire Mediterranean coast and ended in Rome, passing through Ampurias and Rosas, and follows more or less the same route as the National 340 road in the 20th century and the A7 dual carriageway in the 21st century.

Although it is also very likely, according to different studies, that the route of this route was even earlier than the Roman period, and linked the Phoenician colonies and factories settled on the south and southeast coast of the Iberian Peninsula.

It should also be noted that the Roman Bridge of Cotobro has a series of similarities in its construction with other Roman buildings and works in the same city, such as the aqueduct and the interior vaults of the lighthouse of Brigantium or the baths of Segóbriga.

The visit to this millenary monument can be made at any time of the year, thanks to the privileged microclimate of this town on the Costa del Sol Tropical, and it is also very easy to find it either to visit it or if you are sightseeing, because to get to it from the famous beach of Cotobro, you only have to go up the asphalted road on the left bank of the ravine, after a few minutes walk you will arrive at the Molino street that leads directly to the Roman Bridge of Cotobro.

Of course this monument with all the history and legends it has to its credit, and which has been here for two millennia, is another incentive to visit or go sightseeing in Almuñécar and La Herradura.

How to get to The Roman Bridge of Almuñécar?