Restaurants Where to eat 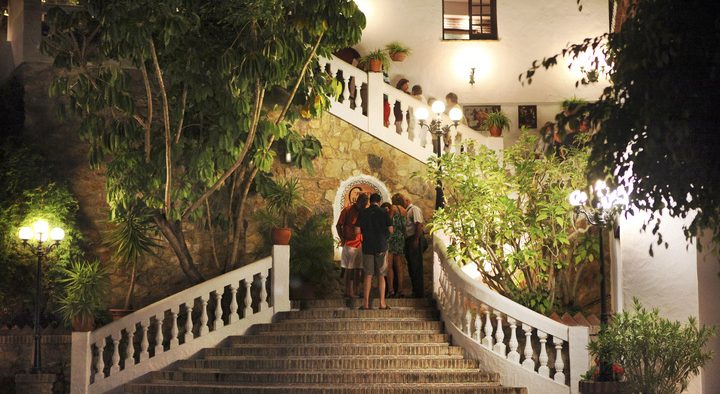 Venta Luciano is a complex situated on the plain of Almuñécar with a restaurant surrounded by trees, a huge terrace where barbecues are held and rooms for large celebrations, weddings, flamenco shows and a large car park.

Venta Luciano is one of the classic must-see places on a visit to Almuñécar for a barbecue dinner organised during the summer on its large terraces overlooking the tropical valley.

In Discover Almuñecar we discover on this occasion the impressive Venta Luciano which is a complex and restaurant, which opened its doors in the middle of the twentieth century, after a long history of the family in the sector, and today is a reference in the Costa del Sol Tropical and throughout the province of Granada.

Since 1.951 the family started to organise verbenas and popular dances on certain important dates such as the day of the Cross or Christmas. At that time there was not much to do, so many of the locals would go to Venta Luciano to celebrate their festivities.

All of this was on the Suspiro del Moro road in Almuñécar, less than three kilometres from the centre of the town,

Later, in the middle of the following decade, the family opened “Jardines Jamaica” next to the Peñones del Santo, and it was there that they began to open their offer to tourists visiting Almuñécar and La Herradura, bringing visitors closer to Andalusian culture with flamenco shows and local products.

Nowadays, in Venta Luciano at Carretera Suspiro del Moro number 18, in the Torrecuevas district of Sexitano, you can enjoy their specialities of lamb chops, roast chicken grilled over a wood fire, special sausage, grilled pork loin, fried or roast potatoes with an exquisite flavour, and a long etc? thanks to its splendid barbecue, as well as its exclusive desserts of natural fruit, ice cream or the unique homemade dessert of avocado with cane honey.

It should also be added that Venta Luciano specialises in all kinds of events and celebrations, so the complex can be booked for weddings, christenings, communions, business lunches or dinners or any other meeting or celebration that may be necessary.

For all this, and for his know-how Venta Luciano has received many awards and distinctions, among which we can highlight: the Almuñécar Tourism Award in 1995; Public Distinction from the Government Delegation in Granada of the Andalusian Government for his work in favour of tourism in 1998; and in 2009 he received recognition from the Association of Journalists of the Coast and the Alpujarra for his professional career and his contribution to the promotion of tourism development on the Costa del Sol Tropical.

It is also a place where you can enjoy live shows, thanks to the group “Aires del Sacromonte”, also every Wednesday there are tastings prepared by the chef Miguel Castilla and other more exotic gastronomic events, come and meet them and let yourself be surprised.

On Thursdays there are barbecue nights with live performances.

And on Fridays at dinner time there is a flamenco singing and dancing show. And to end the week with a good taste in your mouth, on Sundays Venta Luciano holds an open-air barbecue.

There are also DJs, shows, sound and lighting, and for the kings of the house: entertainers, clowns, inflatable mattresses and more surprises.

Don’t wait to find out for yourself what Venta Luciano has to offer.

How to get to Venta Luciano?