Where to sleep in Almuñécar, the best hotels 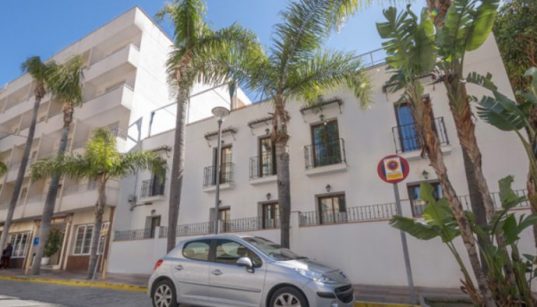 Almuñécar, located in the heart of the Costal del Sol Tropical, is the city in the province of Granada with the greatest influx of tourists. For this reason, it has a large number of hotels and establishments dedicated to overnight stays, with a wide variety of services, so we can safely say that there is a hotel for every type of visitor, from hotels that accept pets, to those that can only accommodate adults, and from the most luxurious 4-star hotels with swimming pool and views of the Mediterranean, to all types of hostels and campsites.
In terms of hotel accommodation, Almuñécar has no less than 6,000 beds.
It should be noted that in the years prior to the pandemic Almuñécar had more than one million overnight stays and was visited by more than 235,000 tourists, of which more than 30% came from outside Spain (mainly from the United Kingdom, Germany, France, Belgium and Holland).
It should also be noted that Almuñécar alone has 25% of the hotel accommodation in the whole province of Granada. It is the only officially recognised Tourist Municipality and is the main economic engine of the entire coast of the province of Granada.
It should also be noted that all sectors and public administrations consider Almuñécar’s hotel industry to be the “most modern and of the highest quality on the Andalusian coast”, “but they also warn that it is necessary to be attentive to changes and to focus on quality and training in order to continue to make progress”.

For this reason, all the companies dedicated to tourism, including all the hotels, hostels, campsites and tourist flats in Almuñécar are strongly committed to training, innovation, excellence and sustainability, as these elements are the keys to the future, always with the idea of continuing to grow and improve as a tourist destination, but always maintaining its hallmarks, which makes Almuñécar a special destination.

After the pandemic, obviously the number of visitors dropped, however, thanks to the hard work of all the sectors involved, Almuñécar has remained the number one tourist destination in the province of Granada, and also in strict compliance with all the quality protocols, creating a perfectly safe environment for all its inhabitants and visitors.

Almuñécar currently has very modern facilities of the highest quality, with 4 and 3 star hotels accounting for almost 60% of the total available supply, distributed as follows:

1 campsite in Almuñécar and 2 in La Herradura.

And almost twenty hostels and guesthouses.

Don’t wait to be told about it, come and enjoy for yourself, with friends or family, all that Almuñécar has to offer for a great holiday at any time of the year.